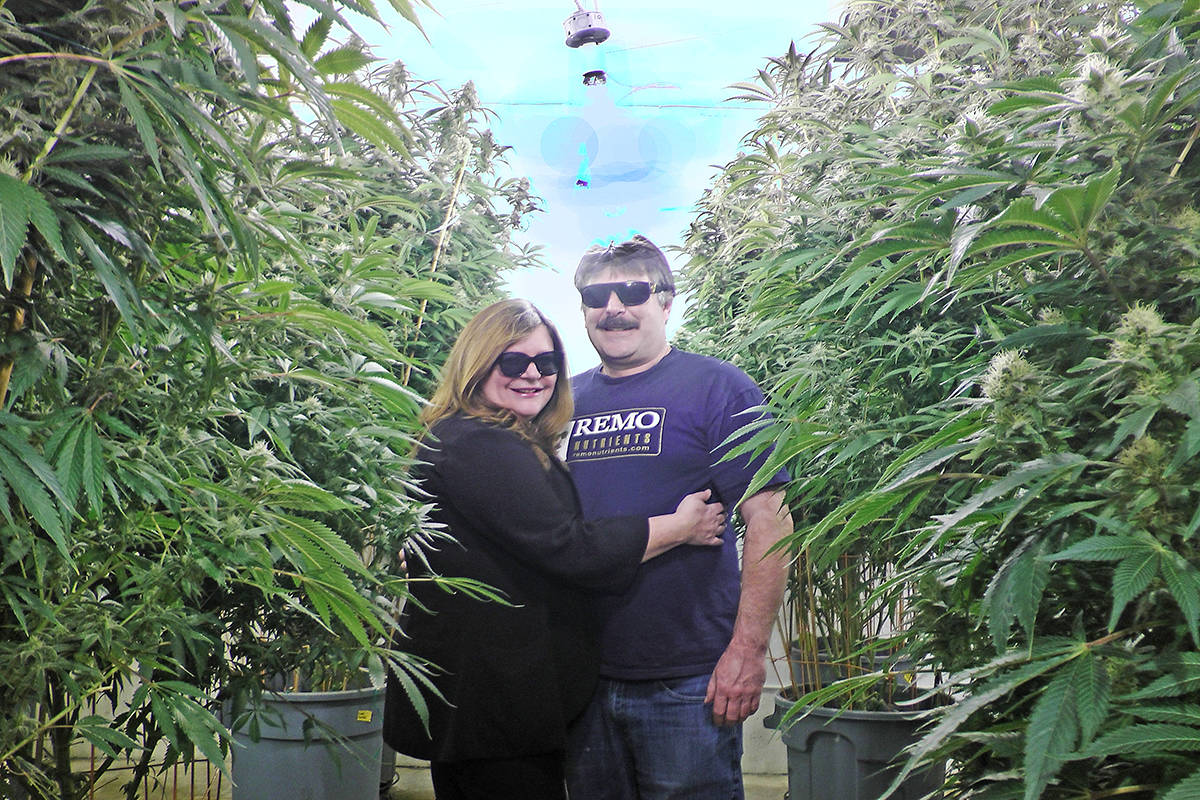 The legal cannabis business has provided a good living for Remo and Sanda Colasanti and their children, but it hasn’t always been easy.

The stigma surrounding cannabis hit the family, who were well known growers. The Urban Remo YouTube channel and other sites made dad a celebrity. They now post four videos a week and have 243,000 subscribers. The videos always have thousands of views, and some are in the millions. It has helped promote their business, Remo Nutrients.

It also meant their son sometimes got a hard time at Yennadon elementary, from kids whose parents were against cannabis use.

“He was getting harassed at school because of what we do,” said Sandra.

But the Colasantis have stayed here and raised their family of three kids.

Their youngest is 21 and still at home. He is the editor of their videos. Their daughter and son-in-law, Joel and Rebecca Twaites, are partners in the business. All of their kids live in their hometown. The goal is simply that everyone has a good life.

“We pay more than [a fast food restaurant] does,” Sandra said. “It’s a great industry other than the stigma, which is sad.”

She said the city has close to 1,000 growers like them.

She is a non-smoker. Remo was in the trades until a broken back in his late 20s, and he started looking for an alternative pain reliever to prescription drugs. He was among the first legal medicinal marijuana users and growers in Canada, she said, as he started in 2000 with a Section 56 exemption to the Controlled Drugs and Substances Act.

They have insisted on his cannabis use being legal at every step. Remo got the exemption after they wrote then Prime Minister Jean Chretien. He referred them to former Health Minister Allan Rock, who advised Remo to “doctor shop” to get the exemption.

They were then setting up a legal grow op, but they couldn’t get an electrician to come and do the work, nor have the city offer a fire inspection.

Legalization has been a passion. Sandra was the treasurer for a coalition that raised money to fight for and win a citizen’s right to grow their own medical cannabis, rather than government being the sole provider.

READ ALSO: Court to decide who can grow medical marijuana

The lawyer was John Conroy of Abbotsford, and Remo offered an affidavit as an expert witness. He wrote about his experience, and how he attended dozens of licenced patient’s gardens “teaching them how to grow good medicine safely.” He concluded cannabis can be produced indoors, in residential settings, safely and economically.

“It was a great win on behalf of the patients of Canada,” she said. “It was an incredible court case.”

Their nutrients company has been a big success, and their products are sold in 32 countries. Recent additions have been South Africa and Brazil. They watch the legalization movement around the globe, and can see where new customers will be.

“I think Brazil is going to take off,” said Sandra. “They are super hungry to make things happen there.”

But most of their business is still in Canada and the U.S., and they are most concerned with those markets.

She is involved with the B.C. Craft Farmers Co-op, which aims at opening market access for “micro-cultivators and processors.”

Maple Ridge has an estimated 800-900 growers, some who formerly sold in a grey market. If even 20 per cent of those can be transitioned to sell to the legal market, it could make a significant economic impact on the city, she said. It would also mean their significant experience and expertise growing – producing what is recognized as the highest quality product – would not be lost with legalization and the emergence of large producers.

“Call it home-based business,” she said. “There are people who have been doing this for years and years, and they’re not even allowed to participate.”

As much expertise as the Colasantis have growing, they are not interested in becoming licenced producers. Sandra explained the regulations are too stringent, demanding too much investment.

“They are meant to fail – you have to put up millions of dollars,” she said. “They don’t have a chance to be successful.”

“We’re going to wait until the regulations make sense, and they don’t make sense yet.”

She also feels there is a long way to go before cannabis is accepted as a legitimate consumer product, that can be put in an attractive package and even advertised.

“This isn’t legalization yet.”

She wants to see places where people can go and smoke cannabis, like a lounge with great food and music like Barney’s Uptown in Amsterdam.

And, the advocate wants to see the day, the most important final step, which will will be recognizing all the potential for cannabis as medicine, and proving benefits many users already assert.

“It’s about getting all the research done for medical purposes.”